HomeDisney’s “Oz the Great and Powerful” Teases with a New Image of the Wicked Witch
Jonathan
Disney News, Walt Disney Pictures
No Comments 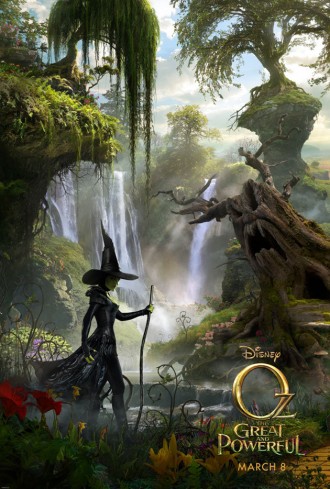 The New Teaser Image from: Oz the Great & Powerful

Walt Disney Pictures has been hard at work on the newest Sam Raimi film “Oz the Great and Powerful”. The film has been gaining in excitement after the success of the Alice in Wonderland film by Tim Burton.

Well released today is an all new teaser image for the film featuring the Wicked witch of the West, our favorite green faced villain. The image is dark, spooky and really is capturing the vision we can expect out of the film. I do love how it has the face in the tree, much like noted in the books and also the early, often not accurate version with Judy Garland.

The film is slated to be released in March of 2013 and it will envision a tale of Oscar Wigg (played by James Franco, who Raimi has worked well with in the Spiderman franchise), and how he found his way to the wonderful Land of Oz. The explores the tale behind the Wizard everyone looks up to in the land as he encounters such characters from the book series as GLinda the Good Witch (played by Michelle Williams), Evanora (played by Rachel Weisz), and also Theodora (played by Mila Kunis).

The Wizard of Oz series and books have been a wonderful read over generations and Walt Disney Pictures adapted one of the book titled “Return to Oz” in the mid 1980s that was brilliant. Who can forget the wheelers right? Or Mombi?

In recent years further adaptions have been made with “Wicked” playing a large role in its popularity once again.

The film is coming along just nice and a friend of our working on the set has said that the things being created for the screen are outstanding. We can only hope. So until March, you can enjoy the teaser image as well as the Official Teaser Trailer.