Disney Lights Up Your Holidays With An All-New DVD FROZEN Sing-Along Edition on November 18! 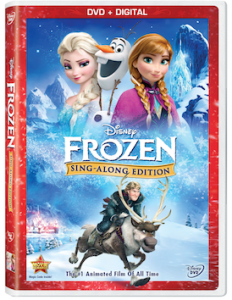 Disney Lights Up Your Holidays With An All-New DVD FROZEN Sing-Along Edition on November 18!

Experience Frozen, the hit musical comedy from Walt Disney Animation Studios, like never before in a new to DVD, full-length Sing-Along Edition! Follow the lyrics with a bouncing Frozen snowflake. Join Anna as she sets off on an epic journey – teaming up with rugged mountain man Kristoff and a snowman named Olaf – to find her sister Elsa, whose icy powers have trapped the kingdom of Arendelle in eternal winter. It’s pure enchantment – and full of fun for the whole family!

Now you can experience the fun of singing along with the whole family and make it a movie night all the same with the Number 1 Animated Movie of all time!

So travel to Arendelle and experience the magic of Frozen in a new fun way on November 18.

Check out the trailer for “Frozen Sing-Along” here: https://www.facebook.com/DisneyFrozen

Sing Along Version of the Film

Original Theatrical Version of the Film

“Get a Horse!” Mickey Mouse Short