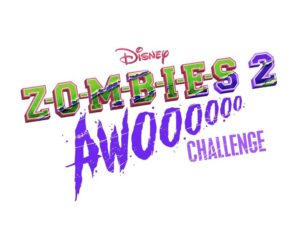 Disney Channel is launching a “ZOMBIES 2” AWOO Challenge, an interactive promotion that gives fans the opportunity to be part of the longest howl of all time. “ZOMBIES 2,” the highly anticipated sequel to the Disney Channel Original Movie “ZOMBIES,” premieres Friday, February 14 at 8:00 p.m. ET/PT on Disney Channel and DisneyNOW.

Beginning today through Sunday, February 2, fans can show off their wild side by entering the “ZOMBIES 2” AWOO Challenge and uploading their very own howling video, to potentially be included in a compilation video to be released on National Werewolf Day on Thursday, February 6.  All submissions will be entered for a chance to win a “ZOMBIES 2” prize pack full of movie-inspired swag from the upcoming Disney Channel Original Movie. Click here for information on submission rules and details.*

In addition, fans can also participate in the “ZOMBIES 2” AWOO Challenge by visiting a special “ZOMBIES 2” Surprise Lockers event in three locations across the country to record and upload their video in-person. The “ZOMBIES 2” Surprise Lockers events are scheduled for Saturday, February 1 and Sunday, February 2 in the following cities: San Diego, California (Fashion Valley Mall), Philadelphia, Pennsylvania (King of Prussia), and Louisville, Kentucky (Jurassic Quest at the Kentucky Exposition Center).

“ZOMBIES 2” is a music- and dance-filled story that picks up as cheerleader Addison and zombie football player Zed are readying for Seabrook High’s Prawn, the school’s super-sized prom. However, the arrival of a new group of outsiders – mysterious werewolves – threatens to shake up Seabrook’s newfound peace and causes a rift in Zed and Addison’s budding romance.

For more information on the “ZOMBIES 2” AWOO Challenge, visit z2awoo.com.

NO PURCHASE NECESSARY. Many Will Enter, 25 Will Win. Enter sweepstakes by 2/2/20 at 11:59pm ET. Open to legal residents of the 50 U.S. & D.C. See Official Rules here z2awoo.com/official-rules for full details including eligibility, prize descriptions & limitations. Void where prohibited.