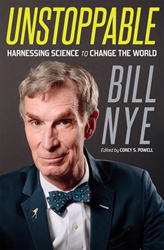 Magic City Comic Con welcomes Bill Nye “The Science Guy” to Miami on Friday January 15, 2016 to meet with his fans at one of the largest comic cons in South Florida. Nye, a science educator, television host, actor, comedian and best-selling author, will sign autographs for his new book,Unstoppable: Harnessing Science to Change the World and support the upcoming documentary, The Bill Nye Film, funded on Kickstarter.

“Bill Nye is a geek culture rockstar for those who grew up watching him on TV,” said Magic City Comic Con founder, Mike Broder.

Nye joins other TV and movie stars at Magic City Comic Con, including actors from Doctor Who, Star Wars, Sesame Street, and more.

Magic City Comic Con returns for its second year in Miami on January 15-17, 2016. Magic City Comic Con is one of South Florida’s largest conventions for comic books, animation, anime, video games, Sci-Fi, pop culture and more. It features three days of some of the biggest celebrities, cosplayers, comedians, entertainers, and more. There will be hundreds of events, including panels, Q&As, costume contests, exhibitors, workshops, films, parties and more for all ages. Magic City Comic Con takes place at the Miami Airport Convention Center located at the Doubletree Hotel, 711 NW 72nd Ave, Miami FL 33126. The event is produced by the team at Super Conventions, the organizers of Florida Supercon and Animate! Miami.